Just the antidote for this self isolation business Great nose, amber rim and not a heavyweight Cab Sauvignon, quite elegant and nice nuanced flavours Beats worrying about COVID19 😁 — 11 days ago 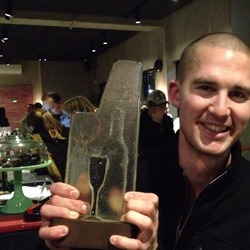 Simon, Ceccherini and 7 others liked this

My last Little Wine IV. A blend of vintages 2012 2013 and 2014. Ripe plums with a hint of prune - fruit cake aromas. Obviously the product of old vines - entirely from the Hoffman Vineyard apparently. Lush and fluid textures on the palate. Amazing quality for the price. — 13 days ago

Paul, Arden and 17 others liked this

Another comparative tasting - had the 2014 of this cuvée 2 days ago. This one with a little more age was showing a little kerosene unlike the 2014 which showed more talc on the nose. Lovely mature dry Riesling flavours of dusty nectarine, quince and mineral. More fulsome in the mouth and less acid than the 2014. A wonderful mature Riesling from the Frankland River District in Western Australia. — a month ago

Ira, Byron and 10 others liked this

Picked this up at the cellar door around 7 years ago from the excellent 2009 vintage. A great combination of cassis and black currant together with Margaret River herbaceousness. Great QPR at $40 and in the dress circle Wilyabrup area. — 12 days ago

Paul, Severn and 15 others liked this

@Severn Goodwin Yes - out there packaging Severn - all female owners and winemaker as I recall. The bottles are great when finished as water bottles in the fridge.

Update on the ownership of this winery - just went on line. Now owned by the Oatley family and evidence of much investment. Penfolds turned Bob Oatley into a billionaire when they paid a motza for Rosemount. Allowed them to indulge their love of ocean racing with the Super Maci “Wild Oats”.

Bright lemon yellow and spotlessly clean in appearance. Nose a little closed. More citrus than stone fruit on the palate- slightly waxy texture with medium minus acid. Built for the long haul when made. Great to see in a very well made Margaret River Chardonnay. Could still enjoy this in 2 or 3 years time. Xanadu has been exhibiting well in the last several years on the Australian Show Circuit. — 25 days ago

Eric, Severn and 12 others liked this

I visited them back in 1990! Nice to see they are doing well!

@Byron Hewett Yes - a couple of years ago they won the Jimmy Watson Trophy for the best One Year old red wine at the Royal Melbourne Wine Show. The “Jimmy “ is probably the most coveted Award in Australia.

Mid Ruby in colour. Aromas of Rose petals. Forest floor, earthy , this wine exudes class - ticks all the boxes of a great Pinot Noir. Totally resolved tannins and virtually zero acid. In its sweet spot and singing. Would love to put this wine in a Burgundy lineup and see what the tasters thought. Freycinet has been a hot Pinot Noir for years before Tasmanian Pinots became flavour of the month. — 3 days ago

Severn, Ceccherini and 18 others liked this

This #cabernetsauvignon is very good. I didn’t like the Titan Shiraz though. #mclarenvale is located around 30 km south of Adelaide at the northern end of the peninsula with the Gulf St. Vincent to the west and the Adelaide Hills to the east.The region has warm to hot summers although winds blowing in off the Gulf and down from the Adelaide Hills moderate the climate and also keep the risk of disease low. Rainfall levels are relatively low during the growing season (usually less than 200mm), although winters can be fairly wet.McLaren Vale has a particularly complex geology: many major soil types have been identified, varying from sand to loam to clay. In general, the soils in the north of the region are poor with lower levels of nutrients, whereas those in the south are deeper and more fertile, producing higher yields.McLaren Vale is one of the oldest wine-producing regions in Australia. By the late 19th century, Thomas Hardy & Sons was producing wine and exporting to the UK. Fortified wine production dominated the first half of the 20th century but after World War II a wave of European immigrants, particularly from Italy, encouraged the return to dry red wine production. In the 1970s, the focus was on full- bodied, ripe Chardonnay and Semillon but, since the late 1980s and early 1990s, this has returned to red wineIt is a large region, with vineyards covering around 6,200ha , and so has a great diversity of microclimates. Proximity to the sea is one factor influencing vineyard climate, as is altitude: vineyards stretch from sea level to around 350m, with most planted on flat or gently undulating land between 50 and 250m.Over 90 per cent of plantings are now black grape varieties.premium priced wines, covering both single-varietal and blends. Shiraz is the most planted, with over half of total plantings, followed by Cabernet Sauvignon and Grenache. McLaren Vale reds tend to be deep-coloured and full-bodied with high alcohol levels and pronounced dark fruit flavours. Many have spice characteristics from oak. In the hotter, lower sites, the fruit flavours can become cooked or jammy. Higher elevations give wines with higher acidity and tannins.Production ranges from inexpensive, high volume bottlings to super-Premium — a month ago

Robert, David and 9 others liked this

Graciano is mainly planted in Rioja and Navarro in Spain. This wine from the warm Geographe region of Western Australia. Interestingly known as Xeres in California - the latter fact from the Oxford Companion to Wine. This wine was deep crimson with a cherry rim. Aromatic primary aromas of cherry and earth. A medium bodied palate showing red cherry and earth - very food friendly. Oak plays a supporting role - the wine spending 12 months in old French Oak. Was a very good accompaniment to Pasta. Rare to find an Australian grown 100% Graciano and on the strength of this we should be growing more. — 15 hours ago

David, Weijie and 13 others liked this

@Severn Goodwin Agreed Severn. When you get countries as large as Australia and the United States you are bound to get a microclimate somewhere that suits the many hundreds of varietals grown in Europe. The heat of the Geographe region of WA would be perfect for Graciano from Rioja.