#Nebbiolo is a surprisingly rare grape. Even in its native Piedmont, it accounts for only 8% of vineyard land. There are fewer than 100 hectares planted in the United States. 🕵️‍♂️🍇Over 80% of prewar Italian immigrants came from Sicily and Southern Italy. Piedmont was the wealthiest and most politically dominant region. But if fortunes were reversed, could Nebbiolo have taken Primitivo/Zinfandel’s place as a grape relatively uncommon on the boot but dominant in California? 🤔🇮🇹🇺🇸Probably not. The Nebbiolo vine is *not* for beginners. It flowers early and ripens late, making it susceptible to both spring and autumn frosts. It loves the occasional fog bath (some say the name is derived from ‘nebbia’, Italian for fog ☁️☁️☁️) but is prone to the mildew that may result from such humid conditions. Its fussiness would make Pinot Noir blush: it demands southwesterly exposure, a proper gradient, constant sun above, and fog licking at its toes. #divaSound anything like California’s Central Coast? 🌅In the Santa Maria Valley, where the East-West Transverse Range bends back into the North-South Coastal Range, it’s possible. Vineyard selection still requires extreme discretion - an eye like @JimClendenen’s, perhaps.Jim began the Nebbiolo program at the legendary #BienNacido vineyard in 1994. Production is small, but if you track down his “The Pip” Nebbiolo, it will only run you about $30. You’ll believe anything is possible when you have real California Nebbiolo of this quality come wafting out of the glass at you! 🙌🙌 🏞.“The Pip” is named after Jim’s old cellar dog Pip, a border collie. So it only seemed right to include one of our own pips! 🐈 — a year ago dark brooding wine with many layers of savoury elements. Great dusty tannins that seem to transverse the dark fruit into that savoury world. 2008 must have been recorked as it was brand new. — 5 years ago

Quite Burgundian. Earthy dark fruit and teenotes. This still needs more time. 13.8%. — a year ago

Severn, Mark and 6 others liked this This is a lively Riesling, from a land known more for Pinot Noir and Chardonnay. This Sta. Rita Hills Riesling comes from the cool part of Santa Barbara County, so Riesling should figure bigger here than it does, I've always thought. The grapes were grown in the western end of the Santa Ynez Valley, in the transverse valley that sucks in the cool Pacific air and shuttles it inland. The winery says the Sta. Rita Hills region is the southernmost cool-climate region in the northern hemisphere. If this one is any indication, a lot of winemakers are missing the boat. The pale wine gives a beautiful apricot and peach aroma on the nose, with just a touch of gasoline coming on. I love that part of Riesling with a few years under its belt. The palate has stone fruit, too, and some truly edgy earth from the Lafond estate. — 4 years ago

Jonathan, Doug and 5 others liked this Perfect daily drinker - a selection you’d most certainly find as a BTG on the wine list. — 2 years ago 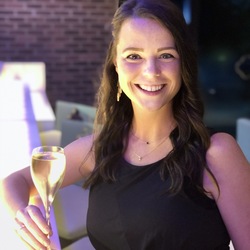 with Krystal
Krystal, Tom and 9 others liked this Casey, Riddley and 15 others liked this Thank you for sharing this amazing review.