2020 vintage. A blend of their different vineyards, in this case 90% calcareous soils and 10% clay with silex. Very deep colour for Pinot Noir. Blackberry and raspberry in the nose. Great balance, with concentrated fruit and subtle spices. Abv. 14%. — 8 days ago

Brent and Romain liked this with Natasha
Ryan liked this 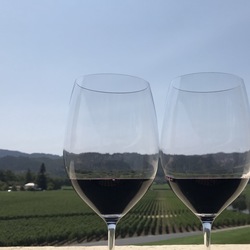 Beautiful, layered, nuanced. One of my favorite Calcareous ZSM vintages. — 7 months ago

We enjoyed a bottle with short rib tacos and prime rib! — 9 months ago OKH w Declan, Lawrence, M, Summer and Quinn.From 60- to 80-year-old Chenin Blanc vines on clayey-calcareous soils at the border from Saumur and Anjou, the dark lemon-colored 2014 Vin de France La Perlée was aged for 30 months on the lees (no racking!) and is pure and mineral on the deep and concentrated nose that reveals beautiful lemon oil aromas. On the palate, this is an intense, ripe, rich, soft and elegant Chenin structured by very fine tannins that lead to a very long and complex, stimulating salty finish. Bottled in spring 2017 with moderate 12% alcohol and 42 milligrams per liter of total SO2, this is a weightless and tender, almost caressing Chenin with great complexity and charm. Irresistible. RP94, 2014 — 3 months ago

Peter, Ericsson and 1 other liked this

Daniel P., Tom and 2 others liked this

Estate’s entry-level wine. Chardonnay from 35-year-old vines planted in clay calcareous soil in Couturier’s vineyards around the village of Loché, right next to Mâcon in southern Burgundy. Biodynamic farming. Lively, complex — 3 months ago

Deep Ruby red similar to a Shiraz in colour. Rich, ripe, aromatics - decadent Strawberry, Raspberry and red cherry notes on nose and palate. A full bodied Pinot for sure - glycerin and slippery. The richness of the fruit dominates the whole bunch stalky influence. The following night still rich and delicious. Soft tannins. The Calcaire name coming from the calcareous soils from a bed of fossilised sea shells laid down 250 million years ago, providing a lime rich sub layer. — 5 months ago

Jamie, Aaron and 15 others liked this

Jeb 99 pointer, Another 2nd day wine, if you’re looking for a typical Paso Fruit bomb go to Austin Hope. If you want real wine head to L’ Aventure Some history,Stephan Asseo, owner and winemaker at L'Aventure Winery, began making wine in 1982, following his education at L'Ecole Oenologique de Macon, Burgundy, France. In that same year, Stephan established Domaine de Courteillac in Bordeaux. He and his family later purchased Chateau Fleur Cardinal and Chateau Robin in the Cotes de Castillion, Bordeaux. Over the next 15 years, Stephan developed into an artisan winemaker of fastidious craftsmanship and gained a reputation as a maverick vigneron. However, his true desire was to be more innovative than AOC law would allow. In 1996, this led him, his wife, Beatrice and his three children, including his daughter Chloé on a quest for a great terroir, where he could pursue his ideal as a winemaker. After searching for over a year among the world's great wine fields, ranging from South Africa to Lebanon, Argentina to Napa, they found Paso Robles. Stephan and Beatrice immediately "fell in love" with the unique terroir of west side Paso Robles. The rolling topography of the Santa Lucia Mountain Range, the deep calcareous soils, and the maritime influences of the renowned Templeton Gap all combine to produce a world class wine country, with the potential to craft some of the world's greatest blends. It is here, in Paso Robles, that Stephan and his family began their adventure, "L'Aventure" in 1998. — 6 months ago

Tom, Stephen and 22 others liked this