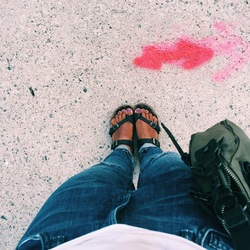 Very easy to drink. Doesn't seem to pair well with anything besides fruit and cheeses though. I do love it though. Nice ever so slightly chilled. — 3 years ago

I found his at Trader Joe's, as a part of some exclusive deal they have with the winery. It's a red blend and it's inexpensive, but I was surprised by it. It's a heavier wine, and it's a fruity and juicy-- I'm guessing there's a lot of Merlot in it but it doesn't say anything about it's content. Lots of red berries and a good amount of vanilla/buttery oak-- sort of a unsweetened raspberry cheesecake, if you will... Despite being pretty hearty it's pretty easy to drink. It's not exactly elegant (but I don't mean that pejoratively), it's suggested pairing is BBQ and Pizza. — 3 years ago

This is the most easily chuggable wine I've ever chugged. While do not recommend it, its cheap enough where you don't care about savoring it. Its sweet (but not moscato level sweet) and very tart. It's sort of like an adult juice box. It's also great as a base for sangria or wine cocktails. Unlike most other red wines, it does not make me gag when it's served a bit chilled. — 3 years ago

I'm not a huge fan of this honestly... there's something missing from it. It's sort of heavy bodied but still soft and sweet. It's not lasting on the palate, but it's got a bit of red berries and something a bit earthy but sweet. It's a wine that would be good if your doing a cocktail party and are lay out and people aren't being picky. It's like a beautiful woman that's completely uninteresting-- it's lush and luxurious but does nothing for me. — 3 years ago

It's very fruit forward and jammy. Its got a lot going on, but it doesn't last long on the palate. It's got a warmth to it that reminds me of a balmy early summer night. Which makes me like it more than I do on its own. — 3 years ago

This is a very earthy, very 'green', tasting wine it's almost savory. I get fresh herbs and green bell peppers with a bit of smoke. I don't get any of the berry flavors others have mentioned. An easy to drink cab franc for someone that normally hates them (like me). — 3 years ago

This is an okay wine. Nothing special, sort of tastes a lot like Yellow Tail or Frontera, those easy pleasing mass produced wines. It seemed a little boring. I would skip it, to be honest. — 3 years ago

Melons and pears start it off and it finishes buttery and vanilla-y almost like cake batter. Very dry, and a tad bit sweet (but it's nothing like moscato or a desert wine) best served frosty. It would be a great brunch wine. Surprisingly light body. — 3 years ago

This wine was too good for me. The 2007 was gifted to me by a good friends parents (they're generous people). I loved everything about it. It's oaky, with berries and something indescribable, but sensual--is it cheesy to call a wine sensual? Perhaps, but it is nonetheless. I would love to get my hands on another bottle! — 3 years ago

This is a great wine. It's indulgent on its own and true to its name (I love a vanilla-y/oaky/buttery Chardonnay). For me it's bit a more challenging to pair with a meal, so I usually go for this on it's own or something simple or drink it by itself. — 3 years ago