"Some years, the advantage of growing Riesling on the Nahe seems amenable to the simple explanation that it is cooler and its season behind the neighboring Rheinhessen or the Pfalz, yet farther advanced than the Mosel. But in the run-up to harvest 2017, local meteorological factors appear to have been more significant than this “Goldilocks” principle. The neighboring Mittelrhein – where fast-draining slate surfaces prevail, and Riesling typically ripens just as late – seems to have been more severely impacted by rain-triggered September rot, but Nahe growers, nonetheless, needed to be strictly selective. The blessing of 2017 was that if vineyards were managed so as to minimize any such impact, conditions after the middle of September proved ideal. “And September is still the decisive month for determining the character of a vintage,” opined Tim Fröhlich, a staunch believer in the significance of a cold snap for building aromatics, energy and refinement in Riesling grapes. “We waited for the weather to turn chilly,” reported Fröhlich, “but we were really very lucky it actually happened, and that our berries were still gold-green and healthy. Had it continued warm and humid for another week, it probably would have been too late to bring in a complete crop of healthy grapes, never mind achieve anything like the quality we did.” Frank Schönleber was far from the only Nahe grower to report that “there simply wasn’t a single day” during a harvest focused on the first half of October “when the weather forced us to take a break.” Whereas in 2016, opportunities for late harvest gave the Nahe an advantage vis-à-vis other Rhine regions, the 2017 harvest here was just as compressed as in other regions, and most growers reported completion of picking in little more than half the time it typically takes." -- David Schildknecht, Vinous , Nahe Riesling 2017: Chills and Thrills, April 2019 To read more about how growers in Nahe overcame the cruel April conditions and to read David's full report, check out the full article on Vinous . Below is a selection of notes from the report.

From mature stands of vines, largely in the Stromberg, this was harvested around a week ahead of the corresponding Grosses Gewächs. Crushed stone is suggested already on the nose, along with pit-tinged peach and zesty grapefruit. The palpably dense palate displays strong piquancy and palpable stone suffusion to complement its rich, generously-juicy fruit. The bright finish, in typical Schäfer-Fröhlich fashion, really gets a purchase on the salivary glands. (David Schildknecht, Vinous, April 2019) — 3 years ago

Severn and Alison liked this

This smells intensely of sage and sage flowers, along with passion fruit, grapefruit and elder flower. (“I am Scheurebe, hear me roar!”) Given such a resounding opening gambit, the wine proves (relatively!) discreet on the polished palate, turning in a coolingly minty and melony direction while preserving such luscious fruit as well as herbal pungency as the aromas promised. The terrifically-sustained finish is infectiously juicy, exhibiting overt but perfectly-integrated and supportive sweetness. Sage, grapefruit zest and smoky black tea accents serve for invigorating counterpoint. On occasion, the Rumpfs have demonstrated that these vines in the Dautenpflänzer can yield Scheurebe capable of playing in the Pfeffingen or Müller-Catoir league – and this is one of those delicious occasions. (On the heels of this beauty – on November 2, 2018 – I tasted a dry 2018 Scheurebe trocken, from fruit harvested in mid-September, that was already improbably delicious; but the Dautenpflänzer Scheurebe grapes from 2018 had been picked only a few days before I visited!) (David Schildknecht, Vinous, April 2019) — 3 years ago

As usual, this is the one dry Hexamer wine to perpetuate the tradition of Prädikat, and that is done solely to satisfy the Norwegian importer who takes all of it. (All to one country, yes; but this has become a high-volume cuvée by estate standards.) The fruit comes from the Eisendell as well as from a site known as Grosser Stein for the huge stone that marked the boundary between the holdings of the Rheingrafen (counts) and those of the Disibodenberg monastery. Picked nearly a month earlier than was the highly-impressive 2016, this weighs-in at 11.9% alcohol, and that shows in an attractive sense of levity and spring vis-à-vis Hexamer’s other dry Rieslings of this vintage. Fresh lime, apple, piquant aromas as well as a juicy, crisp-edged and pip-tinged presence on the glossy palate serve for penetrating. Subtly bitter but cooling and stimulating notes of melon rind compound the sense of crunch and piquancy while lovely, bittersweet inner-mouth perfume adds allure. The combination of vivacity and refreshment with floral and mineral intrigue renders the buoyant, bell-clear, seriously-sustained finish next-sip compelling. (David Schildknecht, Vinous, April 2019) — 3 years ago

The nose is dominated by intimations of red currant, red raspberry, lime and grapefruit; though, to be sure, there are also intimations of marine salinity and crushed stone. Once the wine hits your palate, there is a near-electric spark and a rush of bright juiciness allied to mouthwatering salinity and invigorating crystalline stony impingements. There’s also a suggestion of bittersweet inner-mouth florality more typical for Frühlingsplätzchen. A sense of tightly-coiled energy is allied to silken texture and a sense of buoyancy improbable for such a palpably extract-rich wine of around 12.5% alcohol. The vibrant, refreshing, multi-faceted finish delivers tingling, crunchy fresh fruit and myriad mineral notes, tugging not just on the salivary glands but on the cheeks and mandible. (David Schildknecht, Vinous, April 2019) — 3 years ago

Alison and "Odedi" liked this

Lily perfume on the nose of this Hermannshöhle reminds me both of the corresponding 2016 and of this year’s Kirschheck. That is accompanied by ripe, fresh and high-toned, distillate-like notes of pear and quince. The glossy palate is lusciously fruited, billowingly perfumed, as well as seductively glossy and creamy in texture. Piquancy of pear pip and hints of anise add counterpoint, while fresh grapefruit and white peach contribute welcomed bright juiciness en route to a ravishingly-sustained, impeccably-balanced finish. The covering term “mineral” will for now have to serve the strikingly transparent finish, which becomes more intriguing the longer the wine takes on air. (David Schildknecht, Vinous, April 2019) — 3 years ago 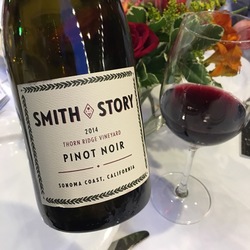 looking forward to trying this, deep love for this dear family winery!

This bottling was reduced in volume not only directly by frost but also by Schneider having utilized some of the fruit from his “Kabinett” parcels in this year’s dry Klamm bottling. But he says he might do the same thing another year, because demand for Kabinett, indeed for sweet wine generally, continues to fall-off at his estate. Apple and pear are wreathed in honeysuckle on a fetching nose, and the palate displays correspondingly luscious fruit juiciness as well as wafting inner-mouth perfume, both reinforced by judicious sweetness. There is an impressive sense of extract-richness despite the wine’s sense of lift. A bright, zesty influx of fresh lime lends refreshment and tang to the lingering finish. (David Schildknecht, Vinous, April 2019) — 3 years ago