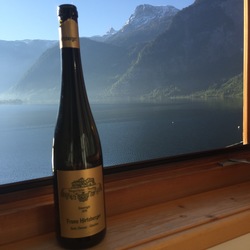 Dan had this 4 years ago

Really enjoyed this one. Medium bodied, dark fruits. Reasonable tannins. As others have said; hard one to cellar, as you may be tempted to drink it before it gets even better. — 5 years ago

More fruit and linear acidity than oak. Well balanced still. Great wine for those who like the clean, crisp style. — 5 years ago

The Calf and the BullA fitting title as I reviewed these two whilst dining on a beef roast.A bit of yin and yang here as the older 2012 Paringa Estate Shiraz stands shoulder to shoulder with the youthful and equally acclaimed 2015 Norfolk Rise, Mount Benson's Shiraz. Paringa - in comparison a much softer/smoother Shiraz than the Norfolk Rise, to be expected with the age comparison. A more balanced and (obviously) mature nose of darker fruits. Finer tannins on the palate and a ballsy (for cooler climate Shiraz) peppery-tobacco finish that is still smooth enough that you ponder its length until it finally reaches the end of your tongue. Leaving the thought of 'the old bull who still has it'.Norfolk Rise - it's jammy! Sticky sweetness on the nose but far from sickening. Tobacco and pepper playing hide-and-seek with the dark fruits. The palate; pepper is extracted from its hiding place and lands smack-bang on your tongue presenting a big hit rearward and mid palate but is a bit shy to come forward. The calf. The SurmiseIf I had a cellar, I'd arrange it laterally by variety/region and vertically by vintage. The 2012 Paringa Estate Shiraz may very well sit alongside the Norfolk Rise Shiraz. However, the Norfolk Rise would definitely delineate itself a few notches south of the Paringa Estate due to its youth. For now I'd be reaching for the Paringa every day of the week with the excitement of what's to come from the Norfolk Rise. These two wines are yin and yang. Separated by three years. Almost incomparable. I'd like to line up the 2014 or 2015 Paringa Peninsula Shiraz against the 2015 Norfolk Rise Shiraz. But for now, the old bull is the one to watch. — 4 years ago

Good value at $20. One more so for the cellar, rather than drinking right away. Definitely needs time to open up if drinking now. Lacks fruit on palate and has adequate structure. In short; $20 well spent but maybe better to see what becomes of it over a few years. — 5 years ago

I prefer an old world style but really enjoyed this one. Broad and fresh on the pallet with adequate acidity — 5 years ago

My wife and I loved this wine. We love the oily texture of MLF but still showing enough forward fruit too. This producer is one to watch grow. — 5 years ago